The governing council Institute of Corporate Administration has inducted an astute administrator, Sir Noble A. Atulegwu as a Fellow of the Institute.

According to the Institute, Sir Noble A. Atulegwu who is currently serving Imo State as Commissioner for Entrepreneurship and Skill Acquisition was deemed worthy of being a Fellow because of his outstanding prowess in adminstrative matters. 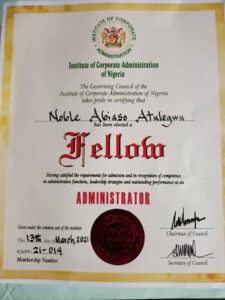 His selection was after strict evaluation process and scrutiny. Sir Noble A. Atulegwu, a receiver of leadership awards and founder of Jant Links Nig. LTD, with the recent recognition is now entitled to append the insignia FCAI on his name. 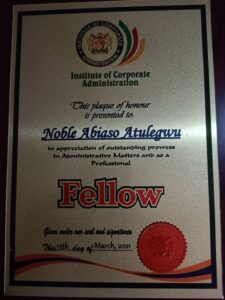 On the added feather in his cap, Sir Noble A. Atulegwu thanked almighty God for it and also expressed his appreciation to the governing council of the Institute. He prayed God to continue directing them.

Commenting on his position in the government of Imo State, he applauded the efforts of Governor Hope Uzodimma in administrating the State towards attaining lofty development and growth and also for providing opportunity for him to contribute to changing the ugly narrative of governance in the State. He said it’s beginning to yield positive results.

If You Don’t Plan To Marry A Lady, Never Do These 3 Things To Her

TEN COMMANDMENT OF MARRIAGE TO COUPLE

15 THINGS YOU SHOULD NOT BELIEVE ABOUT YOUR WIFE

Birthday Felicitation: Wish You All The Best You Desire Udonu Maxwell